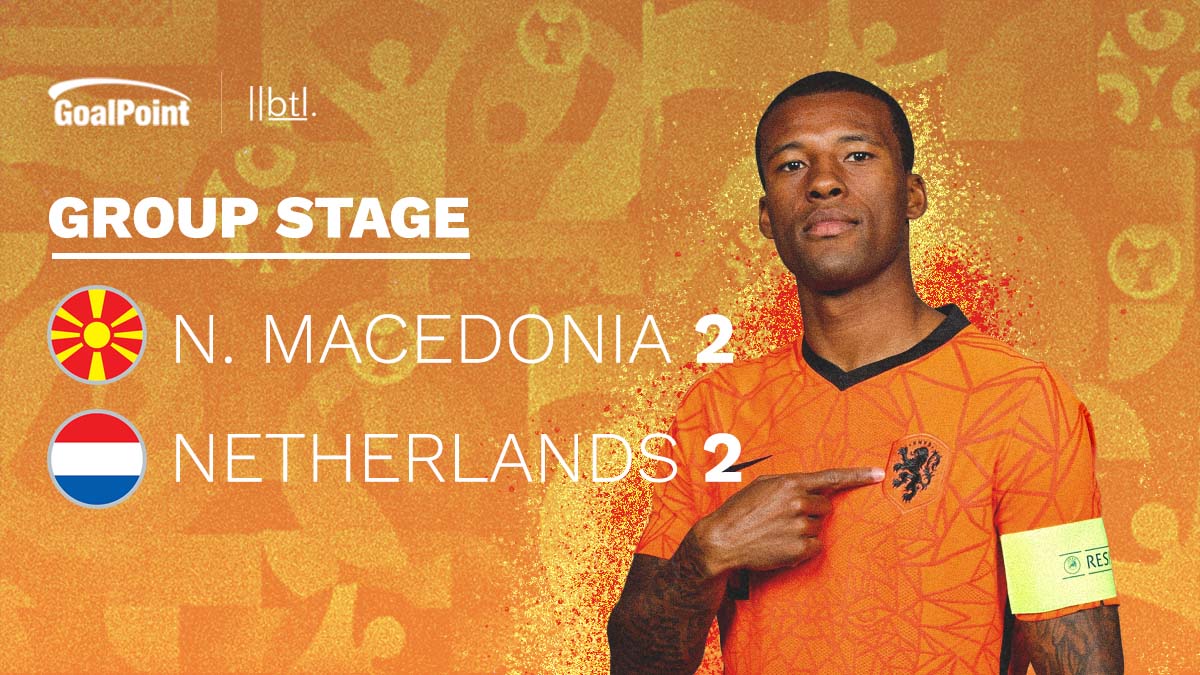 As a nation drenched in footballing history, the Netherlands was left distraught and embarrassed having failed to qualify for the last two major tournaments in 2016 and 2018. Alas, it’s fair to say their current crop has endeared itself to the Dutch faithful with three vintage group displays in Amsterdam.

Whilst their success isn’t led by such elegance displayed by Marco van Basten and Ruud Gullit in 1988, the gusto and the hunger appear as prevalent as ever from both fans and players heading into the knockouts. After threatening and fighting for an early goal which was a post’s width away from arriving, North Macedonia was made to pay when the menacing duo of Donyell Malen and Memphis Depay scythed through with the latter slotting home to give Holland the lead.

From then, the hosts had a lot of fun, passing with precision and poise, penetrating their way to two more goals courtesy of Georginio Wijnaldum. It has been plain sailing for Frank de Boer’s men so far, who are playing with an increased sense of freedom and cohesion that has flowed from the pitch into the stands to create an incredibly vibrant, invigorating feeling around the Dutch that has been absent for far too long. 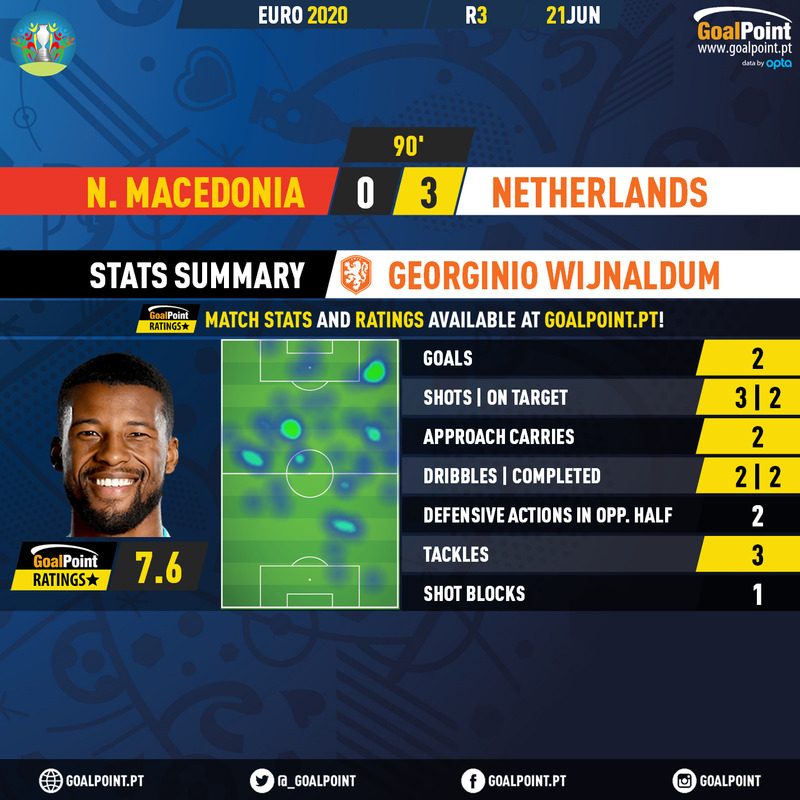 As usual, Georginio Wijnaldum covered every blade of grass and proved to be a thorn in the opposition’s defense ahead of the Round of 16.

Once again, this could have been awarded to a number of different Dutch players; their multiple dimensions going forward lend themselves to the lion’s share of production and possession being interchanged between five or six players across the course of the game. With that being said, it is difficult to look past Gini Wijnaldum – a man who netted a brace from midfield – on this occasion.

Having switched to a five-back formation from having a 4-3-3 just prior to the tournament, attacking production from midfield was of utmost importance to the Netherlands, and Wijnaldum has stepped forward and delivered. Not only did he score two goals, Wijnaldum continued to develop his understanding with Depay to the point where, at times, he switched into the front two with incessant surges forward to help out Malen and allow Depay to roam and run rings around North Macedonia.

As shown by his above heat map, Wijnaldum was absolutely everywhere: working exchanges in the flanks, playing off Gravenberch and de Jong before unleashing the front two before bombing on alongside them. It was a stellar performance that saw him bring the best out of everyone around him whilst being the best player on the pitch. 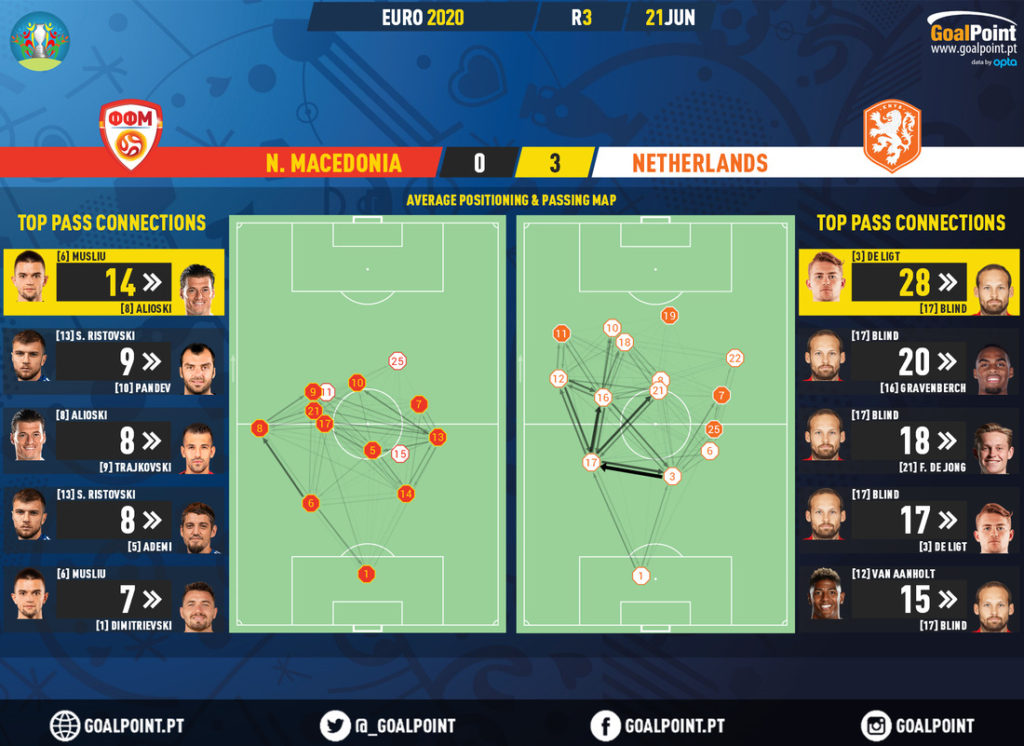 A 2-0 win over Austria a few days ago ensured the Netherlands qualified for the next round, but Frank de Boer chose to not rotate heavily, unlike Roberto Mancini, for the Oranje’s final group stage match. Wout Weghorst dropped out of the attack for PSV forward Donyell Malen, whilst Ryan Gravenberch came into midfield for Marten de Roon, although Jurrien Timber and Steven Berghuis were subbed on at the break for Stefan de Vrij and Denzel Dumfries.

When the Netherlands had the ball at the back and started building possession, North Macedonia retreated deep into a medium/low block 4-5-1. Goran Pandev stayed up front, whilst the other five midfielders remained compact and covered the little horizontal space between each other in midfield. With Memphis opening the scoring early on, the Oranje were able to try a new formation with new players.

The Netherlands’ formation changed from a 5-3-2 to a 4-3-3, allowing the Oranje to play more fluidly in possession. After struggling to take hold of the game in the first half, the Dutch put the match to bed within the first 13 minutes of the restart via a brace from Wijnaldum, who leapfrogged Dirk Kuyt and Marco van Basten to become the 14th-top scorer in the Oranje’s history, level with Rafael van der Vaart with 25 goals.

Overall, the Netherlands were superior from start to finish, and one of the finest performers from their final group stage match was Daley Blind, who completed 93 out of 101 attempted passes, completed 7 out of 9 long balls, blocked 2 shots, and made 10 ball recoveries. His teammate at club and country level, Timber impressed after coming on for De Vrij, playing as a right-back in the 4-3-3 although roaming forward and taking up inverted positions. 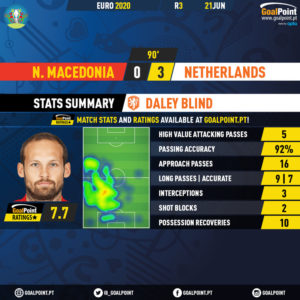 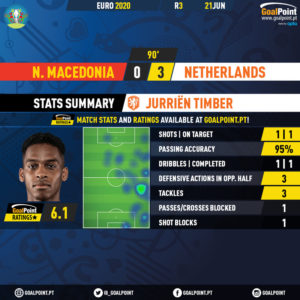 The two Ajax defenders put in a composed display in defense to lead the Netherlands to their second consecutive clean sheet.

In turn, this opened up spaces for Wijnaldum who was able to play more freely in attack and combine with Berghuis, which we saw in the final goal. Frenkie de Jong exchanged passes with Timber before playing it to Malen, who played a graceful lay-off pass to Memphis, who was making a run behind the defense. Memphis’ shot was saved by Stole Dimitrievski, who gently parried it into the path of Wijnaldum, who made no mistake with the finish.

Despite swapping Ronald Koeman for Frank de Boer as manager last year, the Netherlands look like one of the strongest candidates to win the Euros, and after winning each of their three group stage matches, they’ll be looking to go the distance and win their first European Championship since 1988. North Macedonia, on the other hand, have lost their legendary talisman Goran Pandev to retirement, but the likes of Enis Bardhi and Elif Elmas will give them plenty of reason for optimism in the coming years.

Despite the Netherlands’ devastating, multi-faceted attacking dynamic: the precision of Memphis, the willingness of Wijnaldum and the indefatigable Dumfries – which in tandem, renders them capable of beating anyone – there is no doubting the defensive frailties that remain which should have presented North Macedonia with an early lead. Moving forward, it may be the end of the road for Goran Pandev and his resolute comrades – who looked consistently ecstatic both in their facial and creative expression – but it is only the beginning for the Netherlands.

The momentum is there, they have finally found a tactical setup that enables their star players to shine. Nevertheless, it is a recipe that hasn’t yet been tested by the Michelin stars of Euro 2020 thus far, but one that has received nothing but rave reviews until now. Frank de Boer might just have discovered his secret ingredient for success the night before the Bocuse d’Or.