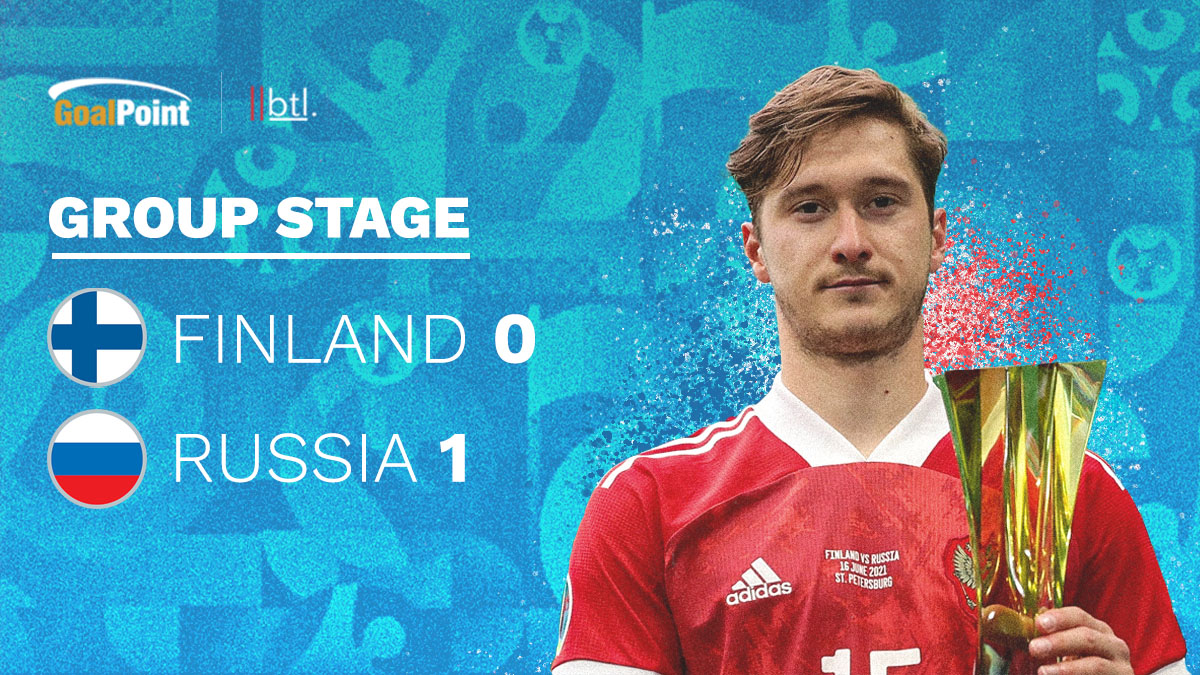 Zenit’s Krestovsky Stadium bore witness to one of Europe’s many “Rye Bread Derbies”, this time, a showdown with historical precedent, Finland vs Russia. Despite Finland being the ones with momentum on their side, the consensus was that this 90 minutes would follow the dynamics of the Winter War of 1939-1940, where a superior Russia would be on the offensive yet struggle to make inroads against a street-wise but inferior Finland.

After mere minutes Finland disproved pre-match thoughts through a lively Joel Pohjanpalo, who had the ball in the back of the net; however, VAR swiftly acted to end the Finnish celebrations, as this proved unfortunately to be nothing more than a false start. The first half seemed to be heading to a dead end as possession was traded cheaply between midfield.

This was until Alexei Miranchuk, a sub in the game against Belgium, popped up in the dying embers to stick the ball in the back of the net, a finish reminiscent of his own in the 2017 Russian cup final. The dynamic flipped on the other side of the half-time whistle as Finland proved more dangerous. Despite this, Lukas Hradecky proved the busier of the two goalies, doing well to save a right-foot strike from Daler Kuzyaev, which proved to be the best chance of the 2nd half. 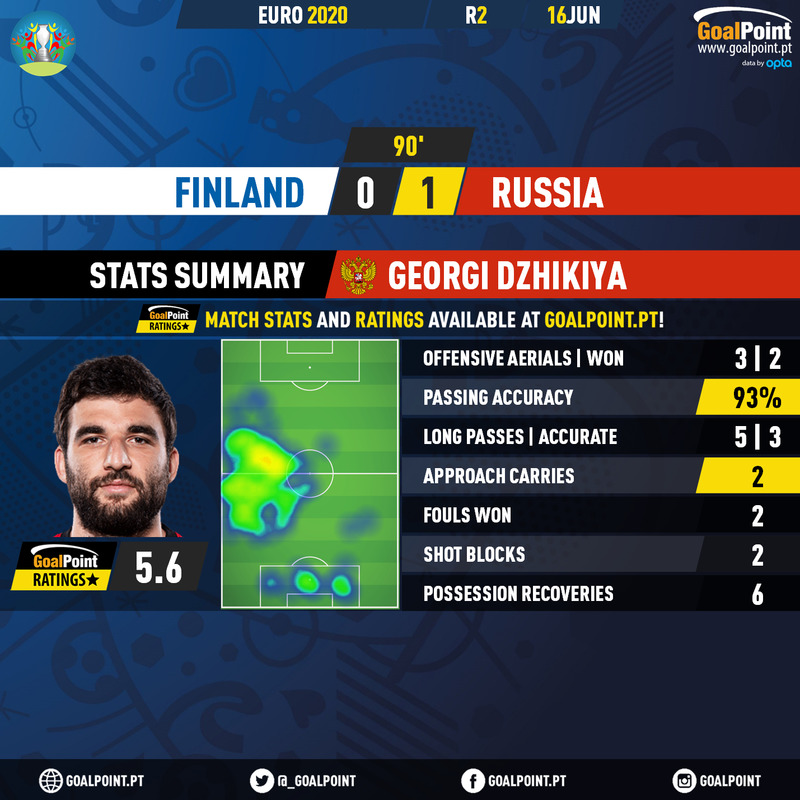 After a hapless display against Belgium, Georgi Dzhikiya dramatically improved when playing in a back three, with the Spartak defender keeping the likes of Teemu Pukki and Joel Pohjanpalo quiet.

Georgi Dzhikiya was the personification of the legendary red-bricked Kremlin Wall, as he proved to be the cool-head who dispelled all of the Finnish threat. Whether it be in open play or thwarting the Finnish aerial attack, Dzhikiya provided a certain calmness that Russia had lacked in recent history. Moreover, Dzhikiya’s success extended to when in possession, as the Spartak CB finished with an impressive 93% pass accuracy on 72 passes.

Dzhikiya was set up as Russia’s LCB and, in turn, was tasked to deal with Finland’s premier attacking talent, Teemu Pukki, which he did, as Pukki failed to do much of anything throughout his time on the pitch. If Russia is to progress further, there will undoubtedly be tougher front lines to deal with, evidenced by the Belgium match; however, if Russia hopes to recreate a sliver of 2018’s success, performances like these from Dzhikiya will go a long way.

Finally, Daler Kuzyaev and Finland’s duo of Lukas Hradecky and Glen Kamara deserve praise. The three had a hand in impacting the day’s affairs; however, none of the three came close to exerting the same influence on the outcome as Spartak’s CB did. 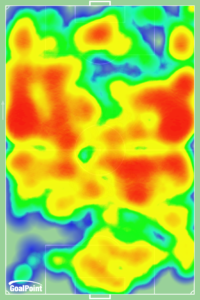 Upon Russia’s first goal, it appeared that the game plan was flipped on its head. The Russian outfit had total belief that a one-goal margin going into the half was all that they needed to see out the game vs Finland, and inevitably they were right. A shift from the front foot to the back foot was the order for the second half, which saw a change to counter-attacking instead of the controlled nature of the first half.

Though the heatmap above shows off the entire 90, it would be of little surprise if the splatters of red and orange in their half were added during the final 45. Stanislav Cherchesov had identified that Finland stylistically and personnel-wise is light on cutting edge forwards and that sitting in and forcing them to push the needle would bode well for Sbornaya, especially when holding the lead.

The Russians assuredly implemented this stylistic change and, apart from a few loose ball skirmishes in the box, appeared to be unchallenged and unfazed by the Finnish frontline. Going forward the solidity of the second half needs to continue as keeping the door locked is the first matter of business, however, far tougher matchups await in Denmark and potentially in the knockouts.

Though the Russian backline performed well, their night was made simpler by an undercooked Teemu Pukki performance. The best way to put it is not that he did much wrong, but instead, he didn’t do much in the first place. Inherently playing as a forward in a side that sits back and defends for its life is an arduous task; however, Pukki offered nothing on the break or when Finland enjoyed large swathes of possession towards the end of the second half, evidenced by the graphic above.

The one clear opportunity that fell Pukki’s way came to nothing as he powered the ball straight at Matfey Safonov; Finland could have done with a player with marksman-like qualities of the legendary sniper Simo “white death” Häyhä. In comparison, his partner Joel Pohjanpalo looked sharp initially but petered out towards the end.

The standout player in the Finnish XI was midfield orchestrator Glen Kamara, who was the architect of seemingly everything Finland did whilst on the ball. His pass map shows both the quantity and quality of the Rangers CM’s passing as he attempted 61 passes with an accuracy of 92%. Kamara offered progression to a bogged-down Finish side whilst also keeping the Russian players honest, racking up cards for Russia.

Group B’s dynamic moving forward is fascinating as we wait to see how Belgium gets on against Denmark. If in all likelihood, Belgium beat the Danish, both Russia and Finland will find themselves locked in with the same points and GD going into the last match, both eyeing a place in the last 16. Finland has already surprised many; however, Belgium will most likely be a mountain too high to climb, whilst Denmark would fancy winning against Russia.

Thus, we may see Group B’s 2nd, 3rd, and 4th placed teams deadlock all on 3 points, surely one of a kind in this tournament and perhaps a mathematical problem for the tournament’s organizers. Russia’s performance today provides hope going forward and reinvigorates knockout ambitions, whilst Finland can leave Russia with dignity, but all sights and thoughts need to be moved to Belgium and Denmark respectfully.

GoalPoint.co.ukhttps://goalpoint.co.uk/
GoalPoint.co.uk is brought to you by GoalPoint Partners, the football analytics company behind GoalPoint.pt, with BreakingTheLines.com. We combine data analytics and human creativity ito offer innovative, impartial, objective and original storytelling and services, to football fans and professionals.
Previous articleTurkey 0-2 Wales: Gareth Bale rolls back the years in an emphatic victory
Next articleDenmark 1-2 Belgium: Dominance from Kevin De Bruyne